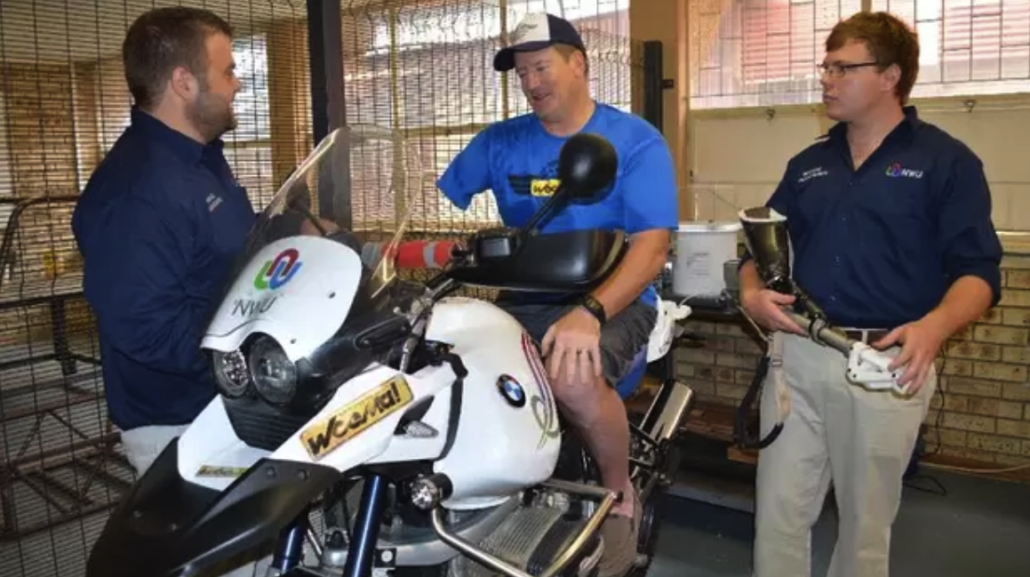 A lecturer in the School of Mechanical Engineering, with Theunis Nel and student Jako van Rooyen. Photo: CP Kloppers

Pretoria – Soapie actor and presenter of various Afrikaans television magazine shows, Theunis Nel, is due to receive R2million in general damages from the Road Accident Fund (RAF) following a motorcycle accident after which his arm had to be amputated.

Nel has featured in popular soapies such as Egoli and Sonkring. He also presented several programmes, including Pasella.

He was also the producer and director of Woema – a programme featuring the sport of motoring and motorcycling. Nel is a respected member of the motorcycle community.

He was involved in an motorcycle accident in 2014 on the N1 highway, near the Garsfontein off-ramp in Pretoria.

Netcare 911, which attended to the accident at the time, described his condition as critical. Nel, who temporarily regained consciousness at the scene, recalled that one of the paramedics said he would probably not survive.

He suffered severe injuries to his right upper leg and knee, back and neck and he fractured his pelvis, among other injuries. Both his lungs had collapsed and he had to have a number of surgical interventions.

He instituted a multimillion-rand damages claim against the RAF in the Gauteng High Court, Pretoria.

Experts submitted reports to the court regarding his injuries and were of the view that he had been severely traumatised by the accident.

Nel, although able to stand from time to time, is mostly dependent on a wheelchair. He was also left with unsightly scarring and cosmetic disfigurement. He also fractured seven teeth.

The court was told that he would probably be disabled for the rest of his life.

The RAF was last year ordered by the court to pay 100% of Nel’s proven damages as well as 100% of his accident-related future medical expenses.

Judge Vivian Tlhapi, has now ordered that the RAF had to pay him R2m in general damages, which include pain and suffering, loss of amenities, emotional shock and trauma and disfigurement.

His legal team told the court that his life as a “limelight” celebrity has changed dramatically.

He has to take pain medication daily to make life bearable.

His lawyer Pieter Coetzee, of Gert Nel Incorporated Attorneys, said the R2m awarded at this stage of the proceedings is one of the highest for general damages in the history of the legal bench in South Africa for these type of injuries.

The next step is to determine how much he should be awarded for past and future medical expenses, loss of earnings and earning capacity. This will make up the bulk of the claim.

Coetzee, meanwhile, said they welcomed the judgment and the RAF’s approach towards the aspect of general damages. While judges often reprimand the fund for not instructing their legal team timeously, the RAF was ready for the case this time.

He said the RAF not instructing their lawyers had become a major problem over the years, causing people to be denied justice on the day of the trial.

Coetzee added that they were happy to have been able to provide Nel with interim financial relief.