According to the National Traffic Act 93 of 1996 (‘the Act’) cyclists are free to ride on any road except freeways or those roads which specifically prohibit cycling.[1] Unfortunately, road accidents involving cyclists occur all too frequently, and the latest Arrive Alive statistics indicate that this prevalence is increasing. Which measures should our Legislature then introduce to protect the safety of cyclists on South Africa’s roads? Unfortunately, the Act currently places no duties on the drivers of motor vehicles to exercise due care when sharing the road with cyclists, but the Provincial Government of the Western Cape has enacted specific provincial legislation that may act as precedent to the other provinces.

While it is morally imperative that the drivers of motor vehicles take responsibility for the safety of those road users that are (more) vulnerable on our roads, like cyclists or pedestrians, it is also equally important that cyclists and pedestrians obey the laws as they apply to this subset of road users.

The Act enforces certain laws that apply specifically to cyclists. Cyclists are obliged to wear safety helmets at all times when using a public road;[2] and must at all times be seated on the saddle of their bicycle.[3] Furthermore, when cycling in a group, the cyclists must ride in a single file.[4] There are also laws governing the bicycle itself. The bicycle must have at least one brake operating the rear wheel,[5] a lamp fitted to the front of the bicycle which emits a white light,[6] and white and red retro-reflectors must be fitted to the bicycle.[7]

Cyclists should also conform to the laws that relate to races that take place on South African roads. When participating in a road cycling event which is sanctioned by Cycling SA, cyclists must hold a licence which has been issued by Cycling SA or which is recognised by the Union Cycliste Internationale (‘UCI’).[8]

Cyclists holding Cycling SA licences are prohibited from taking part in any unsanctioned events. The importance of the sanctioning of cycling events lies in the regulation and oversight afforded to these events in order to ensure the maximum safety for the cyclists that take part in these events. 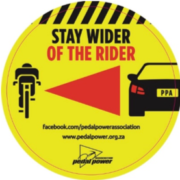 The Western Cape Provincial Road Traffic Administration Act assigns a duty to drivers of motor vehicles to exercise due care when passing a cyclist on the road. This includes leaving a distance of at least one metre between the motor vehicle and the cyclist, and maintaining such distance until the driver is safely clear from the cyclist.[10] Drivers of motor vehicles may even encroach any solid barrier line in order to safely pass the cyclist (where it is of course safe to do so).[11] Drivers not adhering to these laws are guilty of a criminal offence and may become liable for a fine or be imprisoned.[12]

While cyclists have every right to share the road with motor vehicles, and should be able to safely use the road, the unfortunate truth is that drivers of motor vehicles have little regard for the safety of cyclists. Even with the Stay Wider of the Rider initiative, drivers rarely pass cyclists safely.

The rights of cyclists as road users are severely dependant on preventative measures taken by them to ensure their safety. If cyclists follow the laws applicable to them and exercise extreme caution, they can minimise their chances of being involved in a serious accident, but until every province follows the exemplary measures taken by the Provincial Government of the Western Cape, we will not see a marked change in attitude from drivers towards the safety of cyclists on our public roads.