You are here: Home1 / News2 / RAF should open offices to assist crash victims

The Democratic Alliance (DA) is calling on the Minister of Transport, Fikile Mbalula, to issue a directive for Road Accident Fund (RAF) employees to return to work, in accordance to Covid-19 protocols, to allow for the uninterrupted processing of claims and the continued payment of beneficiaries. Road accident victims applying or waiting for payment have found it impossible to get in touch with the fund. This is because the RAF closed its doors at the beginning of the Covid-19 lockdown because surprisingly, it is currently not regarded as essential services. 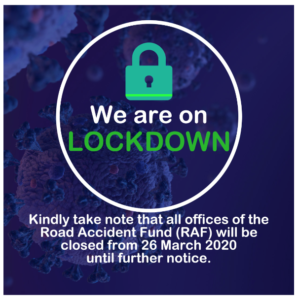 Instead of opening offices with a limited staff compliment to process queries, the RAF has completely shut down all its communications channels. The Fund’s website now displays a message which reads: “Kindly take note that all offices of the Road Accident Fund will be closed from 26 March 2020 until further notice”. In addition to this, the RAF’s call centre line has a similar automated message and emails for assistance have gone unanswered.

This has had a particularly adverse impact on RAF beneficiaries, some of whom have raised concerns around the fact that they have experienced challenges with accessing their payments, which in turn means that:

They are unable to pay for critical medicines, treatment, make payments and lodge other queries.

Some RAF-registered caregivers have also not been paid and hundreds of hopeful crash victims have now been forced to wait indefinitely for assistance.

Many crash victims have been denied their day in Court due to the RAF’s request that all RAF related cases be removed from trial rolls, as staff are currently at home.

The RAF has a frontline obligation in terms of Section 3 of the Road Accident Fund Act, which stipulates that “the object of the Fund shall be the payment of compensation in accordance with this Act for loss or damage wrongfully caused by the driving of a motor vehicle”. Countless accident victims who depend on the RAF’s payment of compensation to sustain themselves have had their pleas met with radio silence. Many of those who secured court orders or are waiting for settlements are dependent on the RAF to regain some dignity and a reasonable living standard after having suffered life-changing trauma.

The RAF’s status, therefore, needs urgent attention and has to be adjusted to that of an essential service.

The statutory mandate of the RAF puts it in line with the requirements of the Disaster Management Act, Annexure D Essential Services, which states that “[critical] jobs for essential government services as determined by the Head of National or Provincial Departments in accordance with the guidance of the Department of Public Service and Administration, including Social Grant Payments and pension payments”.  The RAF provides a social security safety net to many road accident victims by making available compulsory social insurance cover to all users of South African roads.

We implore on the Department of Transport to do the right thing and own up to its ethical and constitutional duty to ensure human dignity, social security and access to courts for all road crash victims who depend on the RAF’s services.

Issued by Chris Hunsinger, Shadow Minister of Transport, 7 May 2020